Yelling “Fire” in A Crowded Theater 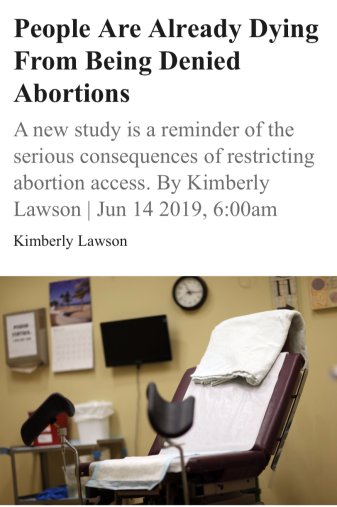 “On May 31, LiveAction, an organization dedicated to “ending abortion,” sent out a tweet purported to be based on scientific data: “In 1972, there were 19 deaths from illegal ‘back-alley abortions.’ In 2017, there were 1,001 complications from legal ‘front- alley abortions’ among just 13 states that reported. Abortion is never safe for the mother or child. Abortion is more dangerous now than ever before.”

So, I popped over to LiveAction’s Twitter feed to see if I could find the Tweet in question. However, as much as I looked, I could not find either a Tweet from the day in question or an article that even remotely had such a quote in it. The only Link that Vice provides links to another Vice article about LiveAction getting booted from Pinterest for bogus reasons, but nothing even close to the alleged quote. But being a good researcher, I decided to do a little digging.

The closest thing that I can find is a Tweet linking an article that has a link in it to another article which links to another article that is rebutting historical claims about the number of deaths of women seeking and receiving abortions. So, I’m just going to say that I’m confused to begin with, because 1) they didn’t provide the source for the quote and 2) the closest thing that I can find even relating to it is in a rebuttal.

Now, in that previous paragraph, I did more than Vice did in their article because I provided not only the possible source, but a direct line to it. But this isn’t about the fact that Vice doesn’t do good sourcing (in this case, they didn’t) but the quote just seems made up. Even at LiveAction’s dedicated news feed at Twitter doesn’t say anything like the alleged quote.

But let’s play devil’s advocate here: could the Tweet have been deleted? Sure, that’s a possibility, but if I suspect that a questionable Tweet might be deleted, I usually snag a screenshot so that I can back up the claim. It’s just good business.

Point being, I try to give my audience the best and most honest representation of what I am interacting with, so I give you the sources to go back and check it against what I am saying, because I value truth.

Now, what’s interesting here is that you have to go to another link in the Vice piece to get the whole story about the Tweet in question—notice that they didn’t care about prefacing the story—to get the full story, this time from the Washington Post, in an article by Meg Kelly.

Now, what exactly is the problem with the Tweet? The first line.

Let me quote the WaPo for you,

“Live Action, an antiabortion organization, seemed to be backing up this claim with data. But in 1972, a total of 63 women died as a result of abortion. Thirty-nine, not 19, died because of illegal abortion, according to the Centers for Disease Control and Prevention.

Now: stop, think and look at this chart. 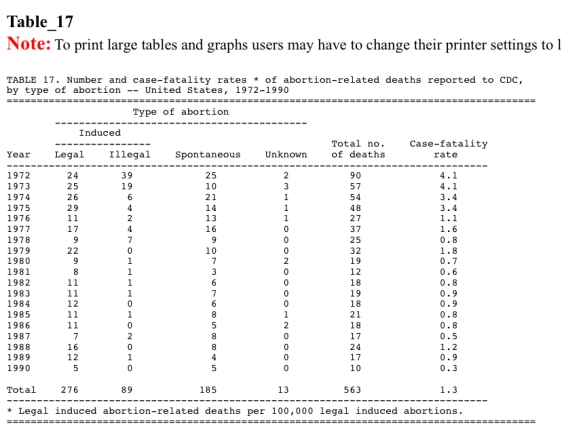 However, our “gotcha!” culture has no sense of either grace or charity to say, “Oops! Honest mistake. We’ve all made them.” No, you make one little mistake and your entire argument can be dismissed with prejudice.

Now, let’s again—the careful thinkers that we are—think about the juxtaposition of the facts presented in the (now deleted) Tweet in question—deaths vs injuries—and ask, is there really a difference given the conclusion in the Tweet that, “Abortion is more dangerous now than ever before”?

This would seem to be a question of what dangers are related to abortion?

Well, this source names a number of dangers/complications, including:

The WaPo piece has to admit that the number of truly “medically necessary” abortions is small because so few actually occur, about 1.3%.

Now, the argument that is being made in the Vice piece is simple: a woman is more likely to die from giving birth than from having an abortion.

The author says it right in the piece,

“There’s also plenty of evidence showing that abortion is safe—even safer than carrying a pregnancy to term.

Well, depends on who it is actually safe for.

The fact that few women die from receiving an abortion does not negate the fact that the procedure carries with it an incredible likelihood of danger from potential injuries. Now the study that the author links to in making the above statement carries with it several caveats, including a simple fact:

“The disparity between abortion and childbirth safety is not surprising. Pregnancies ending in abortion are substantially shorter than those ending in childbirth and thus entail less time for pregnancy-related complications such as pregnancy-induced hypertension and placental abnormalities manifest themselves late in pregnancy; early abortions avoids these hazards.

The Vice piece links to an article reporting a study on the relationship between abortion and depression, which looked at the rate of prescriptions for anti-depressants and women receiving an abortion. What the study found is that those who received an abortion had higher rates of anti-depressant use. What the study also noted is that those same women had other risk factors for depression. The conclusion—speaking non-professionally, but logically—is that depressed women seek abortions, then seek treatment for their depression post-abortively. The abortion, which they supposed would end their depression, becomes the tipping point for seeking help for their depression. Interestingly, the study also found that women who didn’t have an abortion, but went on to have the child, did later begin to take anti-depressants at a similar rate to post-abortive women as the child became older.

What is even more interesting, as another study notes, is that women who seek abortions, “…come from a demographic group more likely to have emotional problems to begin with.”

So, just as an observation, it seems like more resources need to be devoted to helping those who are emotionally disturbed rather than allowing them to murder their children.

To bolster the claim, the Vice piece turns to the Turnaway Study produced by the Bixby Center for Global Reproductive Health at the University of California, San Francisco. The author summarizes the study thusly,

“The researchers’ goal was to better understand the long-term mental, physical, and socioecononmic impact of not only receiving an abortion, but also being forced to carry a pregnancy to term.

Researchers conducted phone interviews every six months for five years, checking in with participants about their health. Ultimately, they found that women who had abortions in either the first or second trimester didn’t experience worse long-term physical health compared to those who gave birth after being denied this care.

Well, there’s been sufficient time to review this study, and there have been a number of criticisms. The primary criticism is that the study was not conducted by someone who was looking neutrally at the data. The group conducting the study is essentially an activist organization, not a necessarily scientific one.

Another problem with this study, aside from the questionable neutrality of its authors, is that the sample size and reporting rates indicate high levels of bias. As one summary of the journal article notes,

“[The] women were invited to participate in the interviews by abortion clinic staff, with the author’s noting that “it is up to the clinic staff at each recruitment site to keep track of when to recruit abortion clients.” This meant that clinic staff could choose not to recruit women who showed signs of distress or staff believed would have problems coping, which would not be reflected in the final study numbers.

The review goes on to note,

So, the Vice author essentially pins the hopes of the argument of the article on a study with serious methodological flaws as well as high selectivity. Excuse me if I’m not impressed.

I’ll let her run with it though,

“…according to the study, 10 percent of women who gave birth after being denied an abortion said they were diagnosed with gestational high blood pressure; and most (10 of 16) developed the condition during the pregnancy they had wanted to terminate.

That statement actually trends with what we see on a national scale, about 10%. Gestational hypertension, like any other hypertension, is only dangerous if untreated, as I have said here. My wife, as I said before, developed the condition toward the end of her last pregnancy. This, however, is not an argument for abortion, this is an argument for women to take better care of themselves while pregnant, something that the Vice article trips over in making its argument, as the author quotes the study’s lead researcher, Lauren Ralph,

““Past research has largely looked at health differences between women who chose to give birth and those who chose to have an abortion,” Ralph explained. “But because of something called ‘the healthy mother effect’—that women who are in good health are more likely to continue a pregnancy— this prior research may have actually underestimated or downplayed the relative safety of abortion. This is because you are comparing the health status of two groups over time, but one was less healthy to begin with.”

Let me just repeat the sentence that should catch your attention:

This is because you are comparing the health status of two groups over time, but one was less healthy to begin with.

So, the argument seems to be, if you aren’t in perfect health, don’t get pregnant. And if you do get pregnant, the good news is that if you decide to not take care of yourself, you can have that little bastard ground up for dog food with no problem whatsoever.

Now, keep in mind that this whole article says nothing about the actual morality of abortion. Nor does the article actually make any arguments supporting the assertion in its title, which could have well been, “Women Die Every Day, So You Might As Well Get an Abortion”.

Here’s the question though, if 700 women were dying every year as a result of having an abortion procedure, would they repudiate their position or would they write it off as simply the cost of doing business?

Let’s just push this argument a little and test the logic of it. Out of over 3.9 million births a year, approximately 700 women die. That’s a mortality rate of 0.018%. Just to put matters in perspective, almost 200,000 women per year die of heart disease. That’s 285 times more women. Also, having a carotid artery stent placed has a mortality rate of 32%. That means that you are over 1700 times more likely to die from having this routine surgery than from being pregnant.

So, Vice, if someone were in danger of having a stroke from a blocked artery, would you recommend the surgery? To be consistent, you wouldn’t, you couldn’t do that.

So, as my title suggests, Vice is simply yelling “Fire” in a crowded theater, and using biased data to support the conclusions. To paraphrase Jonathan Haidt here, they’ve been blinded by their morality.