Understanding the Basis for Moral Claims

Human beings are complex entities, both physically and psychologically. And our psychological complexity becomes increasingly more evident when it comes to engaging in moral reasoning.

During my appearance on Dogma Debate, the host brought up the matter of consequentialism when it came to drawing moral conclusions. The problem inherent in consequentialism is that it can only judge results of actions without any concern for the means that brought those actions about. Consequentialism has no means to judge motives, only results. As one of what I like to call, the Big 4 Ethical Theories, consequentialism determines the morality of a particular action by its results. The rest of the Big 4 include,

Each of these, consequentialism, deontological ethics, virtue, and pragmatic, have their plusses and minuses, but all ultimately assume a transcendent moral standard. Each have the ability to condemn and acquit the other. But let me unpack them just a little more before I drive my point home.

Consequentialism has its roots in utilitarian, as expressed in the modern era by philosopher Jeremy Bentham, who has said,

Nature has placed mankind under the governance of two sovereign masters, pain and pleasure. It is for them alone to point out what we ought to do, as well as to determine what we shall do. On the one hand the standard of right and wrong, on the other the chain of causes and effects, are fastened to their throne. They govern us in all we do, in all we say, in all we think…

Tracking this back through time, it brings us to the principles of the Greek philosophy surrounding hedonism. This is not to say that the Greeks were exclusive in this premise, but that it’s in philosophers like Epicurus and the philosophy that is his namesake we find the clearest expression of it. The ultimate intrinsic good assumed in consequentialism is pleasure, or more specifically a moderated form of pleasure. This particular moral theory has several subsets, including preferentialism and welfare, but in the end, consequentialism assume what is moral in order to prove what is moral.

If consequentialism assumes that it is outcomes that are or are not moral, deontological ethics operates on the premise that outcomes are not what is moral, but rather what leads up to them. Deontology is largely duty-based, and within that framework the greatest moral “good” is to do one’s duty. The particular outcome of fulfilling one’s duty is not judged, but whether one fulfilled a perceived or demanded obligation. Interestingly, it is within deontologicalism that there can be a concept of “rights”, as well as any justification for widely shared moral intuitions. Simply put, as an ethical theory it is concerned directly with people and not states of affairs.

Virtue ethics focuses on…well,…virtues, and not just manifesting them in general, but in particular situations. As an ethical theory there is no necessary assumption of universal principles; rather it zeroes in on questions related to life: “how should I live?”; “what is the ‘good’ life?”; and “what are proper family and societal values?”

If one believes that morals need revision through reflection, then pragmatic ethics would be the ethical theory that would most likely appeal to them. Under this theory, ethical principles are matters for experimentation. This means that, as a moral theory, it’s a “let’s try it” approach to ethics. Because of this unmoored method, it has difficulty in fixing values to means and ends. 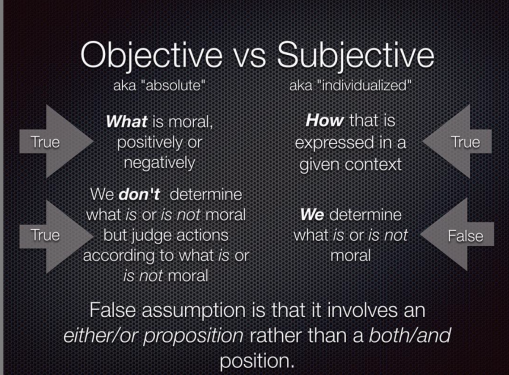 Each of these moral theories–and these are just a few out on the market–have their place in making moral decisions. The problem is that when we try to pick one and sit on it, our moral world will quickly spiral out of control. Now, the moral relativist might try to argue that this proves that there is no moral absolute, but I think that they’re missing the point: that apart from an absolute, transcendent, personal moral law-giver, there is no grounds upon which one can make any meaningful moral judgements. Regardless of which theory one employs, they are necessarily assuming certain moral facts that inherently require justification.

Who has the basis for morality? (ongoing series)