Call me late to the party, but I am finally getting at the whittling away of my books-to-read list, a list which simply keeps getting longer because there’s just so many interesting books, or at least books that look interesting to read, that I want to read, need to read, and simply must read. 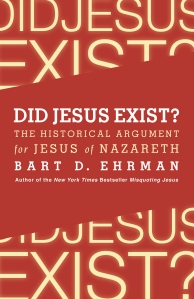 Over the past few days I was finally able to finish reading Bart Ehrman’s 2012/2013 (conflicting publishing dates) book Did Jesus Exist?: The Historical Argument for Jesus of Nazareth. I’ve cited passages from the book in a cursory skimming of it responding to Jesus Mythicists here on the blog before, but I finally got to sit down and tread into the book, in its entirety, and listen to his arguments.

I don’t want to spend the majority of this post going through the particulars of the book, after all other reviewers have already done that and have done so in admirable fashion. Rather I want to give my readers a fair review of a book that could, could be helpful.

Dr. Ehrman gives a very engaging presentation of the material and does a very interesting job presenting an argument for the historical existence of Jesus that is flavored with a very heavy dose of his anti-supernaturalistic skepticism. I found myself somewhat amused at his apparent befuddlement of the Mythicist movement, as he writes in the introduction,

Every week I receive two or three e-mails asking me whether Jesus existed as a human being. When I started getting these e-mails, some years ago now, I thought the question was rather peculiar and I did not take it seriously. Of course Jesus existed. Everyone knows he existed. Don’t they?

Ehrman spends a great amount of time describing in elaborate detail what constitutes evidence and what doesn’t and then goes to unpack what he considers to be convincing evidence for the historicity of Jesus as a historical person, going so far as to use an analogy of George Washington to essentially summarize the Mythicists rejection of biblical sources as legitimate historical sources in Chapter 3, writing,

To refuse to use them as sources is to sacrifice the most important avenues to the past we have, and on purely ideological, not historical, grounds.

The primary issue that I have with Ehrman’s methodology is his blind acceptance of Markan priority and his ignoring of its inherent problems, problems that I discussed here, and how it completely overwrites any meaningful reading of the gospels.

Ehrman does a very good job pointing out he fact that Mythicists have to make a number of fallacious arguments that often play on the ignorance of their audiences, I often find that their arguments are viciously circular, and are often heavily dependent upon severely outdated scholarship and a great deal of speculation.

I did find myself agreeing with much of what Ehrman said when it comes to how Jesus is often misrepresented in so much of what presents itself as evangelicalism today because it is often a caricature of the historical Jesus, although I did have to stop short of complete agreement for what should be obvious reasons. I agree with some of what he said when he discusses the misconceptions of how we got the Bible, and the New Testament in particular, simply because most evangelicals are simply ignorant of how it has come down to us. I do not agree, at all, with his conclusions about Jesus.

So, what’s my takeaway?

I want to recommend this book simply because it gives an agnostic/atheist response to the atheist myth that Jesus did not exist. I said that I want to, that doesn’t mean that I can.

Ehrman is an engaging writer and does a very good job representing the best arguments of the Mythicists. He also does an admirable job responding to them and demonstrating the mistakes in reasoning and the factual errors that they engage in. Ehrman knows his New Testament and does a very good job making his arguments as well as from the texts but his theology sucks. He’s an unbeliever and his unbelief shines.

Should believers read this book? I definitely think it would be worth the time, but I would only recommend it to strong, theologically grounded believers.

Ehrman answering a mythicist at a speech